ONYX Cohort 5: Adventure at Yowk in the Aral Mountains 2018
Theme: “Leaders Called to Step into Uncertainty.” 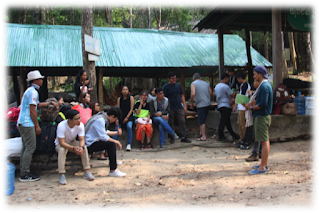 With a loud ‘BANG,’something, maybe a dead branch, hit the corrugated tin roof over the gazebo where we were all sitting in a circle, startling all 23 of us out of reverie. The dead branch slid off the roof and onto the adjacent tin roof with more of a ‘pang’ sound than a bang this time, and was in the process of being dumped out into our tight circle when we noticed it was large green snake, a meter long, and about two inches in girth. It was back peddling on the slope of the adjacent tin roof (if snakes can do that) in order not to end up in our laps. All efforts were to no avail, and it was now in the air, writhing, and dropping quickly toward Ms. Sarady, our Kompong Chhnang coordinator. I didn’t think she was able to move that fast but she vacated her spot pretty quickly. The green snake hit the concrete, the spot where Sarady had been sitting with a sickening ‘thud’ and slithered as fast as it could back into the jungle. It has apparently been after a nest of geckos (the large and colorful variety) that were living above in the rafters, of which boasted a large and colorful mother and about 5 bug-eyed young ones. It didn’t take long for our group to settle back down, though. 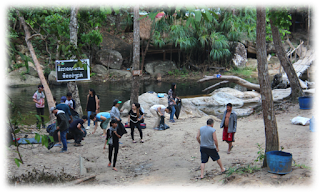 Friday night, after orientation, settling in to our special sandy and flat spot at the bottom of a series of 7 waterfalls, setting up tents and hammocks, former ONYX student advisors/helpers built the campfire. Just as the program was about to start, with night overtaking dusk, the sounds of a large Cambodian-home-made diesel truck approaching began to drown out the soothing sounds of the forest creatures, shattering our tranquility. Cresting the small hill, two beams of light appeared, and the monster lumbered down the access road, belching fumes with engine whining in first gear. Its headlights first lit up the treetops as it crested, and as it dropped down the hill the behemoth’s headlights pierced darkness, lighting up the dark forest behind us and across the stream. It backed up right into our midst, and a crew wearing head lamps jumped out and began to unload about 2500 board feet of lumber and carried stacks of it on the shoulders down the river like beasts of burden to a site where they were building another lean to. In less than two hours, they were gone like they were never there. Did it faze our campers? Hardly. Ms. Sarady talked about Biblical leaders who were called to step into total uncertainty. She had them discuss in pairs, 2 questions: 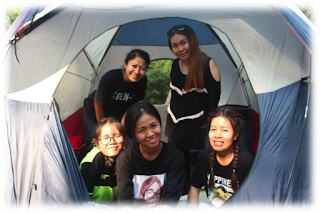 “Think of a time when you knew you were called into uncertainty. How did you feel? And, how did you respond.”

The discussion went on much longer than I anticipated and I was happy to see campers embrace the question with such zeal.
Sleep was elusive. It was dang cold. The last two retreats were so humid I couldn’t sleep so I didn’t bring any long pants, or long sleeved garb. Froze my butt off in my hammock at the edge of waterfall. At least I got to see stars and a yellow moon dancing across the night sky. Of course the Cambodians were prepared and slept warmly and soundly. At 5:30 a.m. it began to rain cats and dogs and a tent full of lady campers came scurrying out to take refuge in the gazebo. The rain stopped shortly, we had breakfast and the campers went on a gallery walk that we set up along both sides of the stream with quotes, prayers, sayings, and things to do alone or with their partner that connected to our retreat theme of meeting God in uncertainty, suffering, and in nature. Many were impressed by the Serenity Prayer and Richard Rohr’s quotes - 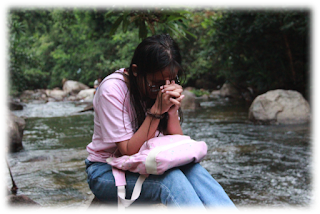 “If you don’t transform your emotional pain, you will transfer it,”and; “All true spirituality is about how one deals with their pain.”

“Personal Spiritual Formation’is an ongoing process of transformation that leads to a total rearrangement of thinking, emotions and soul; a new way of seeing everything and being conscious.”

It was fascinating to listen to the Campers process what was new and helpful for them.

Campers in the afternoon were organized into small groups by Mr. Lay (Phnom Penh Leadership Coordinator) to conquer the 7 waters falls to ascend to the top. Most were successful and at the evening campfire, Mr. Lay led them in processing their experience. They were most impressed with how everyone worked together to care for each other on the journey. The 3 small groups presented humorous skits about how Jacob, Moses, and Elijah met God in nature, solitude, uncertainty, and emotional suffering and radically transformed. 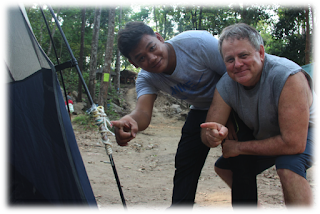 Another sleepless night, freezing in my hammock. I was, for once glad to see 5:30 pm roll around, and even happier to get cup of coffee, even though it was instant. We had been rather lucky this year - since Yowk is a National Park, people began to show up with boom boxes and cases of beer slung over their shoulders to picnic each morning, shattering the tranquility of the jungle. For some reason, they really didn’t show up in force until 10:30 am, and they left around 4 pm, so we had some golden hours of true silence and solitude just to our selves. The last morning we did sort of a 1.5 hour Emmaus Walkin pairs where the campers were instructed to find a very beautiful and quiet spot to reflect, meditate, draw, write a poem or song, and just take in God’s creation with their 5 senses - and just listen. Before they embarked, they were given a handout of the scripture about the two disillusioned disciples on the journey to their home village of Emmaus, so they got the gist that they might just meet Jesus along the way. 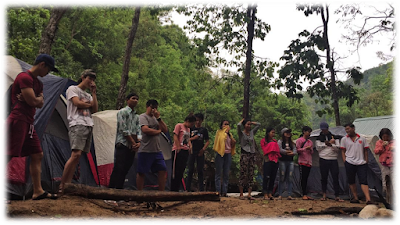 Lay led the processing of the modified Emmaus walk under the Gazebo where we were visited by the green snake the day before, and many campers confessed they had no idea what to do alone with that much time away from their phone, music or laptops but were pleasantly surprised how it went so quickly and was so refreshing. In debriefing, we viewed drawings, listened to poems, and heard how that more than one camper was fascinated with how all the systems of nature in the jungle seemed to work together perfectly, and that we Christians ought to take notice of that. Others were rather distracted by sounds of the rushing water and birds singing and chortling in the jungle, but as they reflected overtime, it became a symphony to their ears. Some reported that they were rather surprised to wake up from a short, deep, restful sleep, with some God-given insights. Other observations turned into metaphors that resulted from simple observations of how the water flowed down the mountain, how it wore away the rock over time, how little eddies and pools fit into the grand the scheme of things, and just how did those fascinating water spiders do their thing, skirting about and skiing over the top of water where it lay still enough. Hearing it in the Khmer language made it very poetic, unlike listening a Biology 101 lesson. It is always such a privilege to be allowed to learn from these precious young people, and share in the intimate workings of their lives. Just when I come close to losing hope about the church, these people bring me back from the edge and keep me hanging in their until the next year’s retreat.

Thank you to those who pray and give, to who enable me to be here and be transformed by those God sends into my life.

Peace for the Journey,
Brian and Bophal